BOOK BLITZ - The Cowboy and the Pencil-Pusher by S.C. Wynne 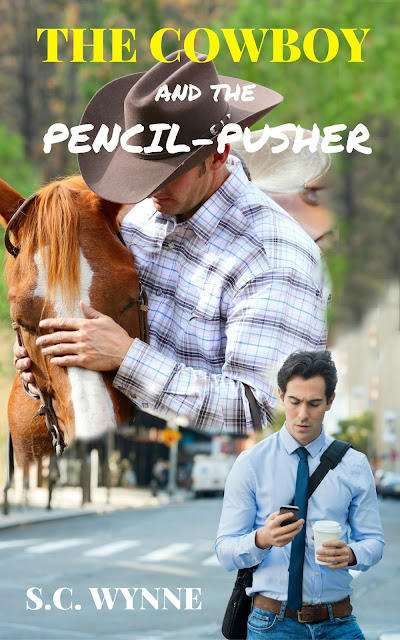 Paul Smith prefers his calculator to people. People are annoying and demanding, but numbers will never let you down. He works tirelessly for his dad’s mortgage firm, foreclosing when it makes financial sense, and not losing any sleep over it either. Paul’s dad has always been a demanding taskmaster. But when he has a major health scare, Paul’s dad see’s the error of his ways. He decides he wants to change to a more benevolent business model. After having decades of harsh business practices drilled into him, Paul is not a fan of his dad’s new idea.

Cort Callahan lives and has worked on his granddad’s ranch most of his life. But times are hard and they’ve fallen behind on their mortgage. When Paul’s dad decides he wants to offer them a way out of debt, if they’ll just go along with his unorthodox idea of turning the spread into a dude ranch, it’s hard to tell who thinks it’s a worse idea: Paul or Cort.

But when Cort and his granddad take the deal, Paul is forced to work closely with Cort. The two men are surprised to realize they share an intense attraction that only grows stronger the more they’re around each other.

The problem is Paul has spent his life trusting numbers and calculations. No matter how much he wants Cort, when he looks at how different they are from each other, the two of them just don’t add up.

“We should probably discuss what Marty’s decision is about the dude ranch.” I examined my fork as I spoke. “If you’re going to tell me to stick it up my ass again, I should get my steak to go.”

He lowered his menu and winced. “Yeah, sorry about that; Marty and I feel better after talking to Frank.”

I set my cutlery down and met his gaze. “So do I take my food to go or not?”

“If we say no to your proposal what happens?”

“I go back to LA.” I left unsaid what we both knew; that if they rejected our proposal I’d be initiating foreclosure proceedings against Marty. “Are you going to say no?”

Cort leaned forward. “Maybe we should wait until the drinks come before I answer.”

“That doesn’t sound promising.” I had mixed feelings. I knew my dad would be happy if Marty said yes, and I liked it when he was happy because then he stopped harping at me. But if Marty agreed to the project I was stuck in this little town for at least three months. My dad had it in his head it was good for me to supervise these ventures of his because it got me away from my computer.

As if on cue the waitress brought our drinks and after she walked away Cort finally spoke, “Who manages a project like this?”

“Me. For now. Just like I did in Texas. My dad isn’t up to it yet since he gets tired easily.” I felt breathless as I held his enigmatic gaze. “So what’s Marty’s decision?”

He sipped his beer, wiping foam from his lips with one tanned finger. “Marty wants to go for it.”

“Yeah?” A strange feeling akin to relief washed through me. I was confused by why that would be, but there was no denying I felt like a weight had been lifted off of me. “I won’t lie. I’m surprised.”

“You put the fear of God into Marty. He knows he won’t get any mercy from you if he says no.”

My face warmed but I held my expression steady. “He’ll thank me in the end. He’s going to be a wealthy man.”

“Some would say he already is.”

“You probably mean something sappy like already he’s rich with friends and family?” I arched one brow.

“Please. I’m not talking about that kind of nonsense.” I rolled my eyes and held up my menu, shielding my face. “I mean he’ll be wealthy in a way that matters.”

S.C. Wynne started writing m/m in 2013. She loves writing m/m and her characters are usually a little jaded, funny and ultimately redeemed through love.

S.C loves red wine, margaritas and Seven and Seven's. Yes, apparently S.C. Wynne is incredibly thirsty. S.C. Wynne loves the rain and should really live in Seattle but instead has landed in sunny, sunny, unbelievably sunny California. Writing is the best profession she could have chosen because S.C. is a little bit of a control freak. To sit in her pajamas all day and pound the keys of her laptop controlling the every thought and emotion of the characters she invents is a dream come true.

a Rafflecopter giveaway
Posted by Sweet Sexy Escape at 10:00:00 AM