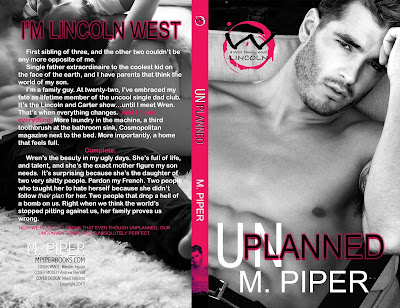 I’m Lincoln West.
First sibling of three, and the other two couldn’t be any more opposite of me.
Single father extraordinaire to the coolest kid on the face of the earth, and I have parents that think the world of my son.
I’m a family guy. At twenty-two, I’ve embraced my fate as lifetime member of the uncool single dad club. It’s the Lincoln and Carter show…until I meet Wren. That’s when everything changes.  And I mean everything. More laundry in the machine, a third toothbrush at the bathroom sink, Cosmopolitan magazine next to the bed. More importantly, a home that feels full.
Complete.
Wren’s the beauty in my ugly days. She’s full of life, and talent, and she’s the exact mother figure my son needs.  It’s surprising because she’s the daughter of two very shitty people. Pardon my French. Two people who taught her to hate herself because she didn’t follow their plan for her. Two people that drop a hell of a bomb on us. Right when we think the world’s stopped pitting against us, her family proves us wrong.
Now we’re out to prove that even though unplanned, our unconventional life is absolutely perfect.
#singledad #nerdalert #artgirl #newrelease #sale #blogtour

*If purchased before September 1, receive a free short story at the end of the book!*

I should not have been amazed by this book because hello this IS M. Piper but still...I absolutely loved it. I like a good single Dad story and this one has enough twists and turns and heat to make it an excellent single Dad story. Lincoln West had life all figure out. Get a college degree while having as much sex as possible. Until the day when a little bundle of joy is dropped into his lap. He embraced being a father and his life revolves around his child. Wren has made some mistakes and her parents make her pay for them every time they open their mouths. She wants to make it on her own without their help and has become a stronger person despite some serious setbacks as a teen.These two meet and there are indeed fireworks. They have chemistry, but they also both have secrets. How will each deal with not only the secrets they individually have but also with the punches that are coming their way? I definitely had tears in my eyes through several parts of the book. This is a heartwarming story of love, family and strength!