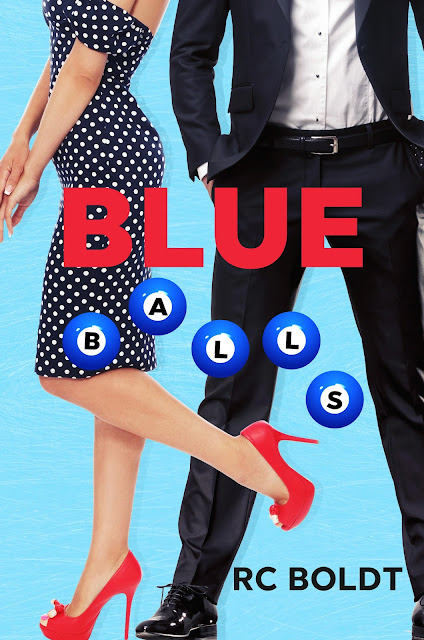 What happens when the universe gets in the way of your "follow through"?

Truth: A painful condition caused by a prolonged state of sexual arousal without release.
Myth: Only affects males.

I’m beyond frustrated with the man who’s left me high and very far from dry. Multiple times. But, somehow, even though I’m not interested in a relationship, Mr. Tall-Dark-and-Handsome keeps me coming back for more—one crazy, sexual debacle after the next.

Come hell or high water, the stars will align, and the release will be out of this world.

I’m captivated with the woman who’s left me sixty-nine shades of blue, and she's only in this for one thing. The first time, I blew it—and not in the good way—but I’m going to ensure we finally see it through. I need to put an end to this “plague” of sexual calamities and prove to Sarah that we can have more.

It's time to grab the universe by the balls and show it who's boss. 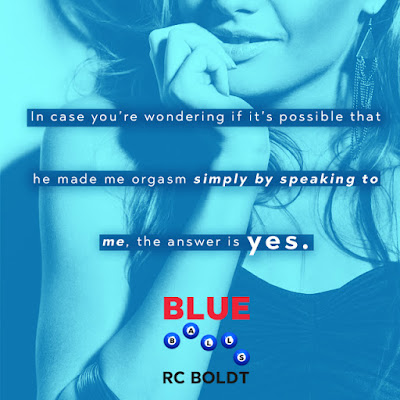 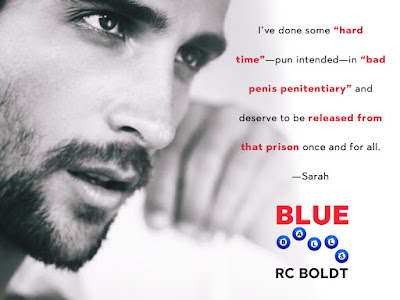 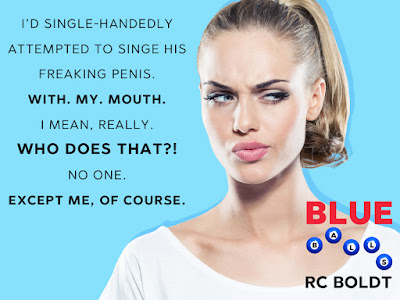 "Embrace the shenanigans."Truer words have never been spoken in this truly hilarious romantic comedy by R.C. Boldt. From the dedication to the end of the book, there is not a page I read that didn't have me laughing and smiling. I can only describe it as slapstick comedy in book form, Three Stooges meets Love Story.Sarah and Jack are friends. They are constantly pushed together because of their friendships with Maggie and Ry (who I believe are from Clam Jam which I absolutely cannot wait to read despite knowing the outcome). There is a definite attraction between the two but for one reason or another, neither was truly available to "hook-up". Sarah makes no apologies for who she is. She like sex and she doesn't hide that fact. She is sweet, sassy and sometimes way out there but there is something so loveable about a person who is comfortable in her own skin. She does not, however, believe in finding her Happily Ever After. She just wants her Happy Right Now.Jack seems to be this super hot, put together guy. But there is way more to him than meets the eye and Sarah is about to find out just what makes him tick. Finally the time comes where they are both free to finally see if this chemistry is real or just a passing fancy. But these two STILL can't seem to get it together. So many hilarious mishaps keep them from consummating their relationship but they never give up. Every time a new "situation" came up, I would tell my guy and we would both laugh until we cry because we know that if that ever really happened to us, we'd give up. But I have to hand it to these two. They will go to any lengths to finally get there, but what happens if they do. Does that chemistry just finally fly out the window or do they make it to the end together? Blue Balls (and yes by the end of this book you will absolutely believe that women can have them too lol) will definitely have you rolling on the floor laughing and Jack will have you swooning because despite the slap stick, he is absolutely swoon worthy!

I absolutely loved the first book in this series, but after reading this one...it is totally my favorite. First, let me start off by saying that this can be read out of order, however, if you someone who prefers to be surprised, then you might want to start with the first book. If you chose to start with this one, I guarantee that you will be downloading the first book too.

Oh.My.God! I freaking love Sarah. She is witty and funny and I couldn't get enough of her. This book is written like she is telling the story for the most part...she talks to the reader. It would make the BEST audible. I was laugh before I turned the first page and that continued throughout the entire book. I imagine for men it is not funny to have blue balls, but this book puts a different spin on blue balls and shows you that women can have them too.

Sarah is this fun chick, who suffers from relationship phobia and prefers to keep sexy light and fun. Jack is the her best friend's boyfriend's best friend...try saying that three times fast. And these two have off the charts chemistry, but they can't seem to seal the deal so to speak. So, check out this book to find out all the hilarity that ensues and how these two manage to overcome the unbelievable amount of obstacles that keep them in a state of blue balls.

You will will laugh so hard, and even find yourself swooning for Jack and wanting to smack Sarah in the back of the head a few times...but it will be so, so, so worth it.