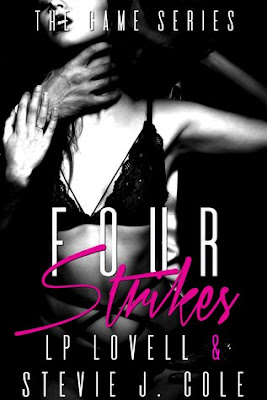 Book #4 in The Game Series

Four days. It’s only been four days and I’m no longer certain of who I am. Right and wrong, does such a thing exist in the corrupt world of the sexy billionaires Tobias Benton and Preston Lucas? I don’t believe they do. The call themselves superior. They call me their little lamb, and they make me do terrible things.

No safe words. Are you game?

CATCH UP ON THE

REST OF THE SERIES

Book #1 in The Game Series

Book #2 in The Game Series

Book #3 in The Game Series

Lauren Lovell is an indie author from England.

She suffers from a total lack of brain to mouth filter and is the friend you have to explain before you introduce her to anyone, and apologise for afterwards.


Lauren is a self-confessed shameless pervert, who may be suffering from slight peen envy.

LP loves to hear from readers so please get in touch.

Stevie J. Cole lives deep in the woods of Alabama with her husband and two precious daughters. She studied Epidemiology concentrating on cancer research but has always had a passion for writing. Some of her stories will strip you bare, some will give you nightmares, but the one thing she can promise is that she will always give you stories that make you feel.
Raw. Gritty. Love.
Because sometimes characters need to be flawed.
P.S. Stevie's greatest fear is the impending zombie apocalypse. Think about it: swarming armies of decaying, oozing corpses stumbling around with clicking teeth, trying to eat your face. Nothing about that is good. NOTHING!

UP NEXT IN THE GAME SERIES

I love this series! I can't get enough of Tobias and Preston. There is just something about them that makes my panties wet before I finish the first page. And holy hell...this one starts out unbelievably hot & what I wouldn't give to be Ella.

This book introduces the third player, but you don't get to know his name. I kinda feel bad for Ella more than any of the other books. Then there is the cryptic last chapter from Tobias's POV...it leaves you wanting the next book...right now!

Don't miss out on this series it's freaking awesome!